One of the Christmas traditions in my family is the tamalada: a tamale making party. I know they were held by several tias, but the one I always involved with was thrown by my Grandma Amy and Grandpa Tony. One of the reasons a tamalada exists in the first place is out of necessity. It’s not really possible to make just 1 tamale, or even just a dozen. You buy the ingredients in bulk, enough to hundreds. That’s a not a task for a single family, so you invite everyone over to help.

The tamalada at Grandma Amy’s house used to take all day. Throughout the day, families came over in shifts to help. The fun part was the telling of stories and jokes, and how things used to be done in the old days, and of course telling each other that “you’re doing it wrong”. One of the funniest moments of my whole life was Grandma Amy spending a long time telling us a joke, only to forget the punchline at the end. To this day, I don’t remember what the joke was about, but I remember everyone exploding with laughter so hard come of us were crying.

My prima Paulie(my dad’s niece) has thankfully taken on the burden of keeping the tradition. The first batch of masa was bad, so she had to make an emergency run to the store to get a new batch, then we were back in business. Cyndi was helping make the filling, which is traditionally pork but we also had chicken: 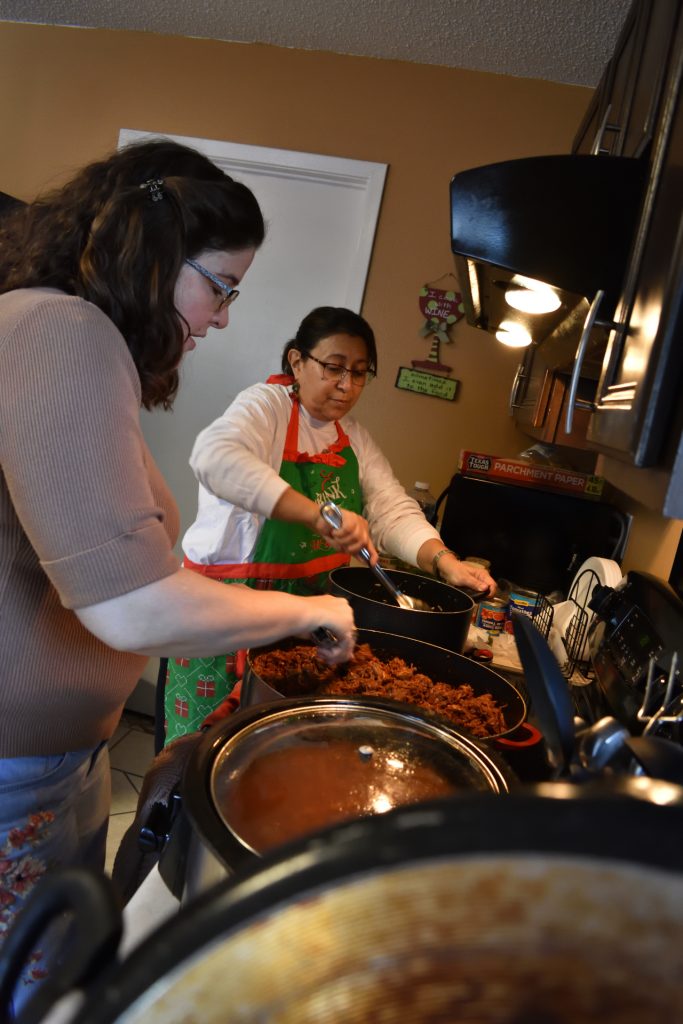 This is what it looks like when all hands are on deck putting the masa into the ojas(corn husks):

Another crew fills, closes and folds the tamales, then they are placed into a steamer, and covered again with ojas: 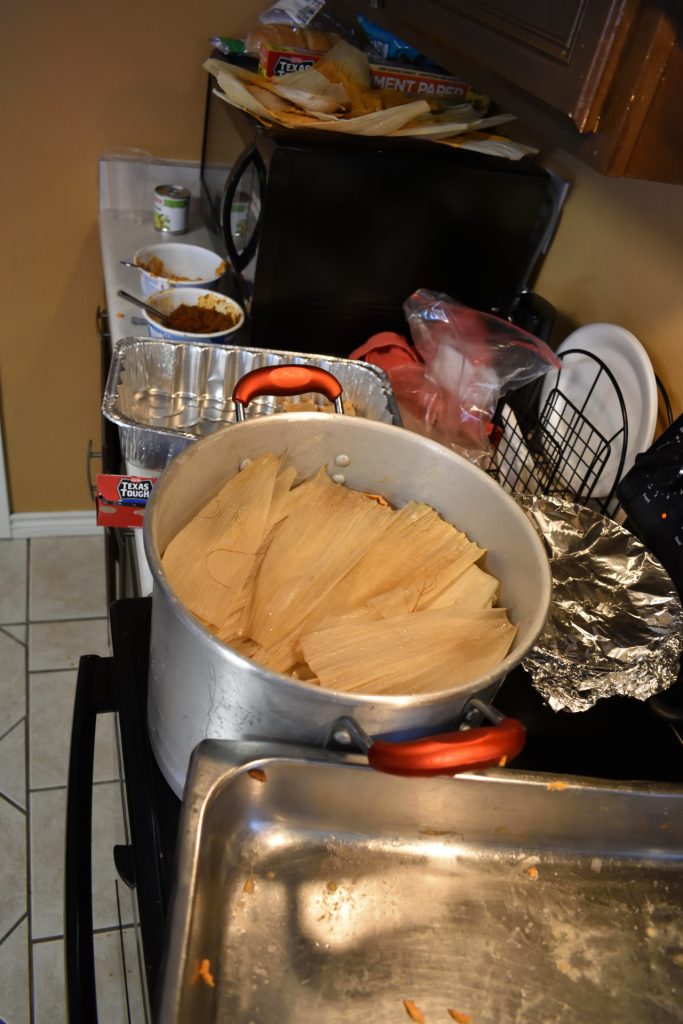 This year, Adam’s girlfriend D’Arcy was able to join the fray, and when Paulie and husband Jimmy learned she was a ballroom dancer, a conjunto dance lesson was quickly materialized: 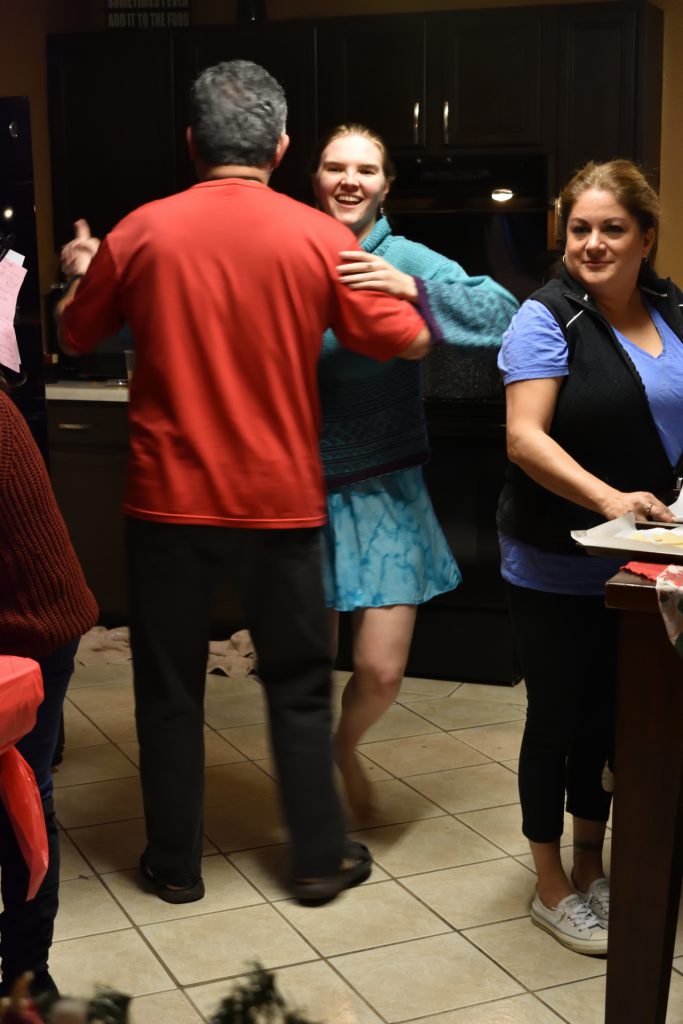 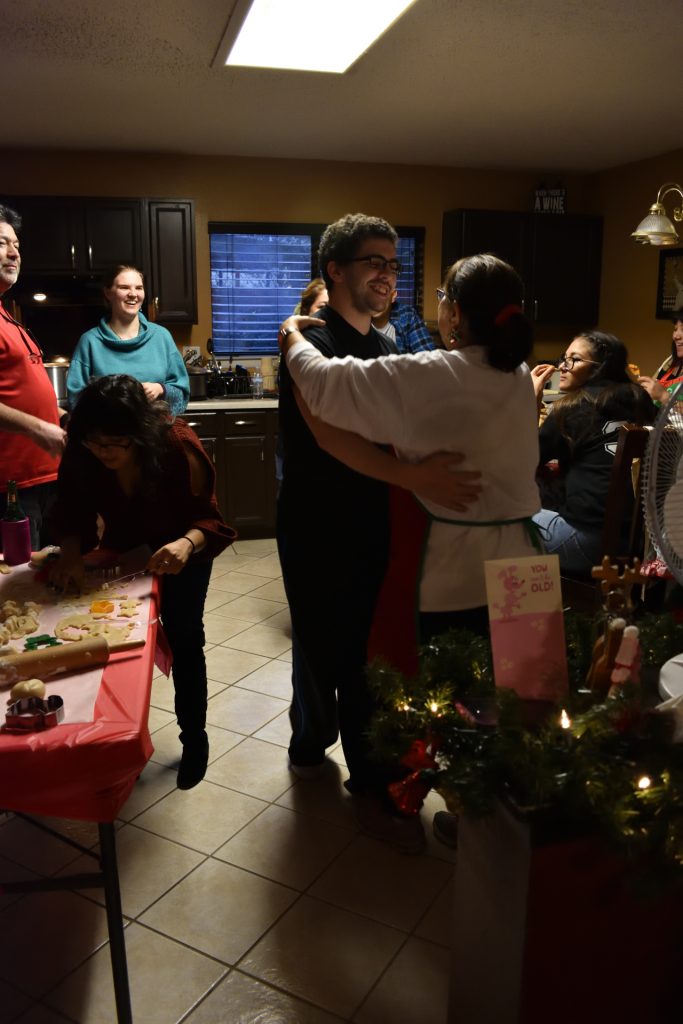 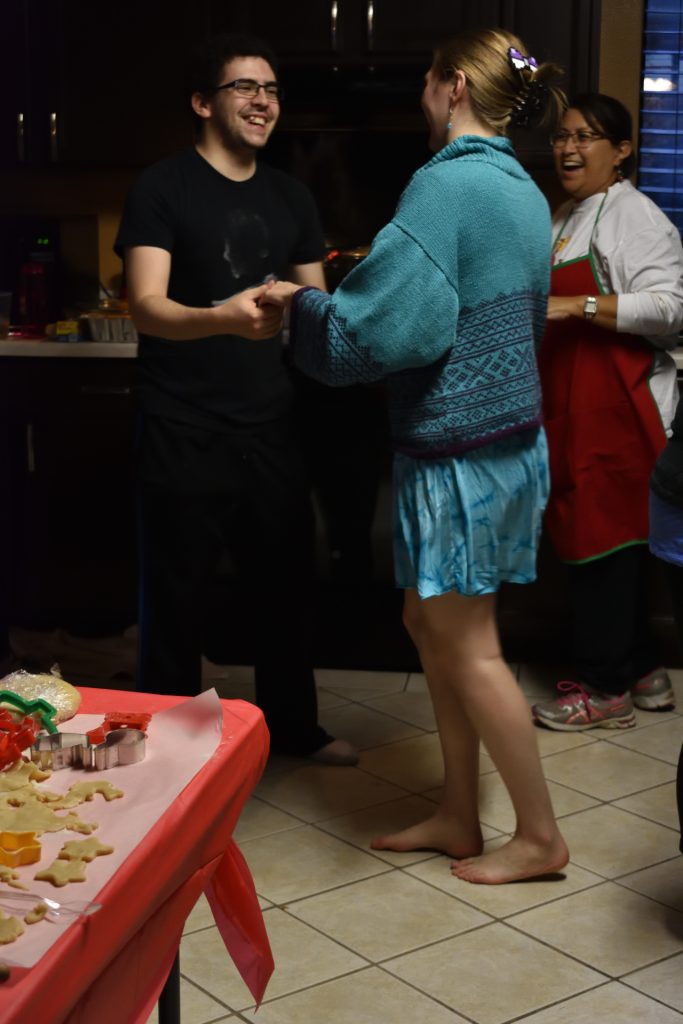 Many years ago, Paulie introduced the tradition of decorating and making cookies, when the kids were little. The grown up kids still participate, though. Here’s my nephew Kristian making the shape of my home state: 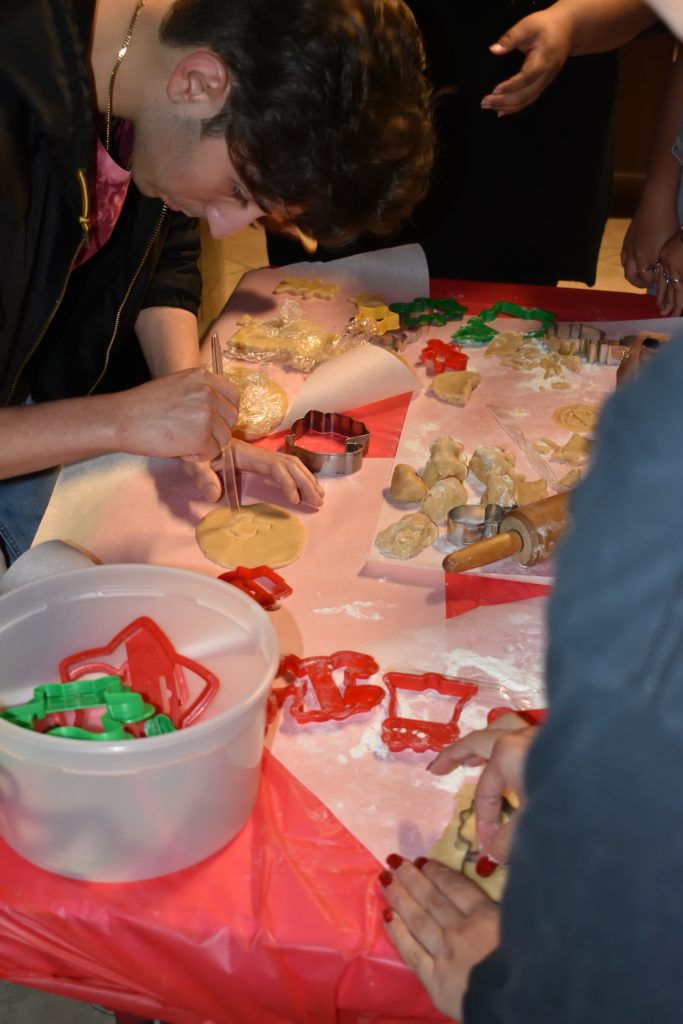 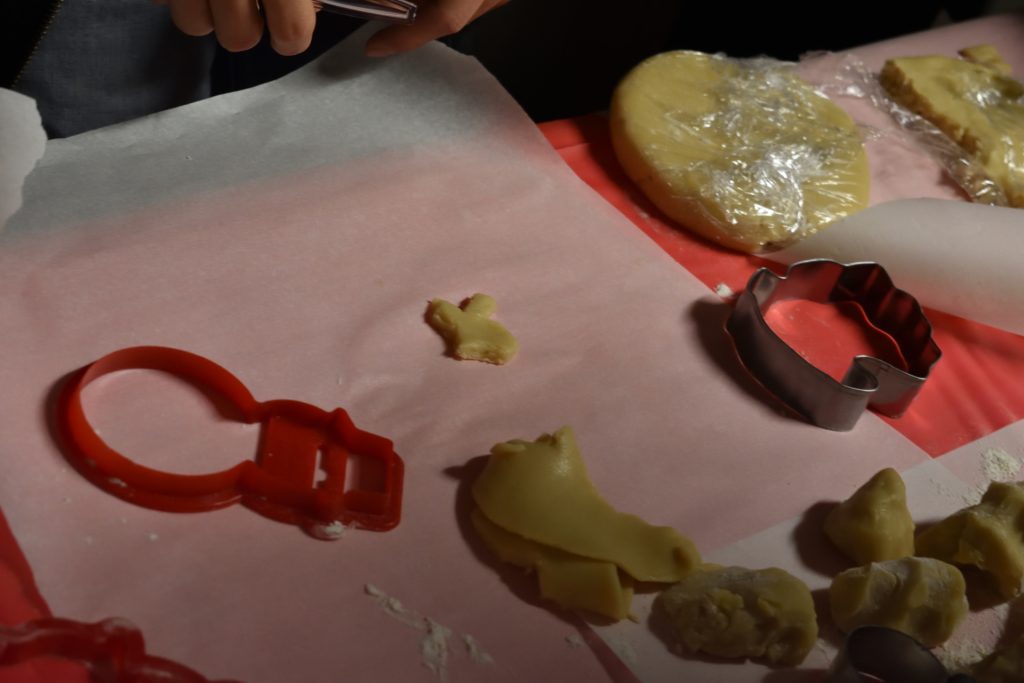 Things get loud, especially when there is a Cowboys game on, so the introverts need to spend some time in the next room, aka, Chill Central. Even my brother Mike took a break: 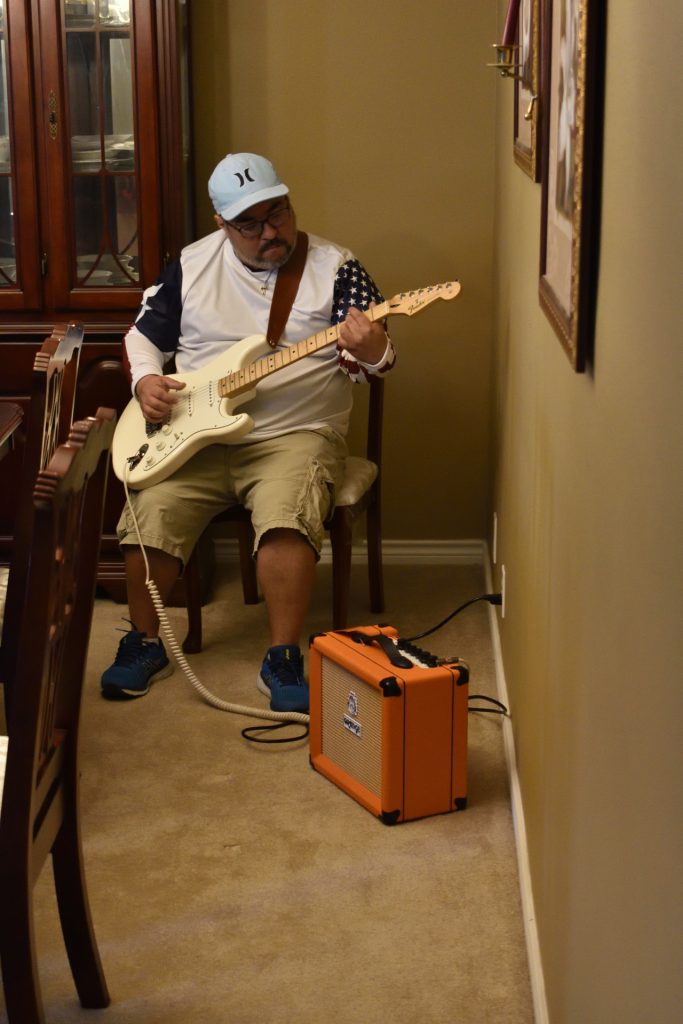 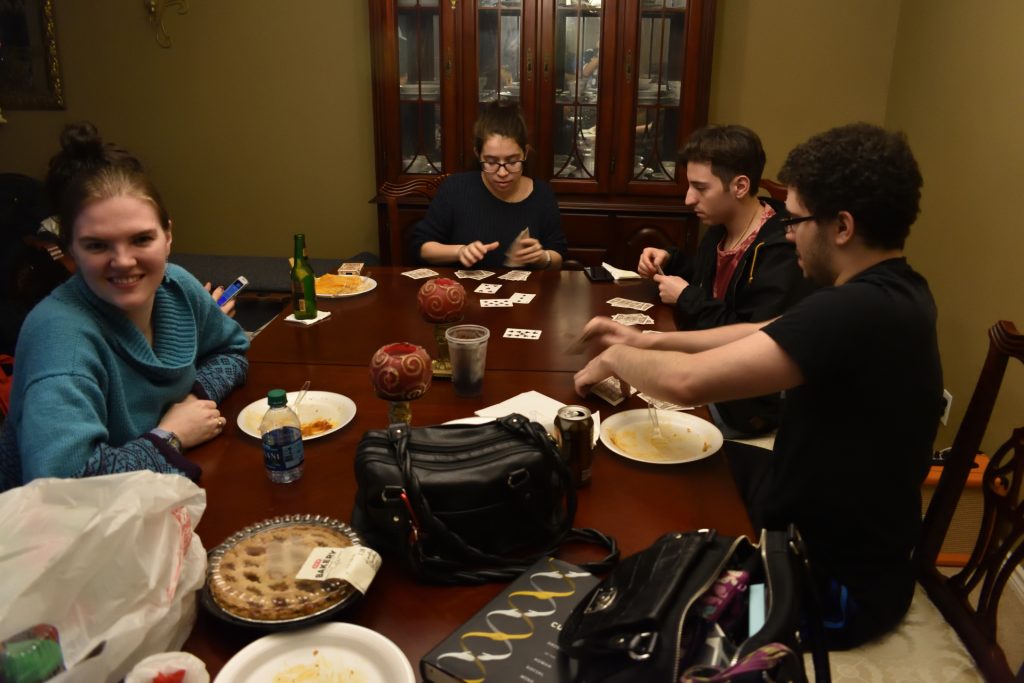 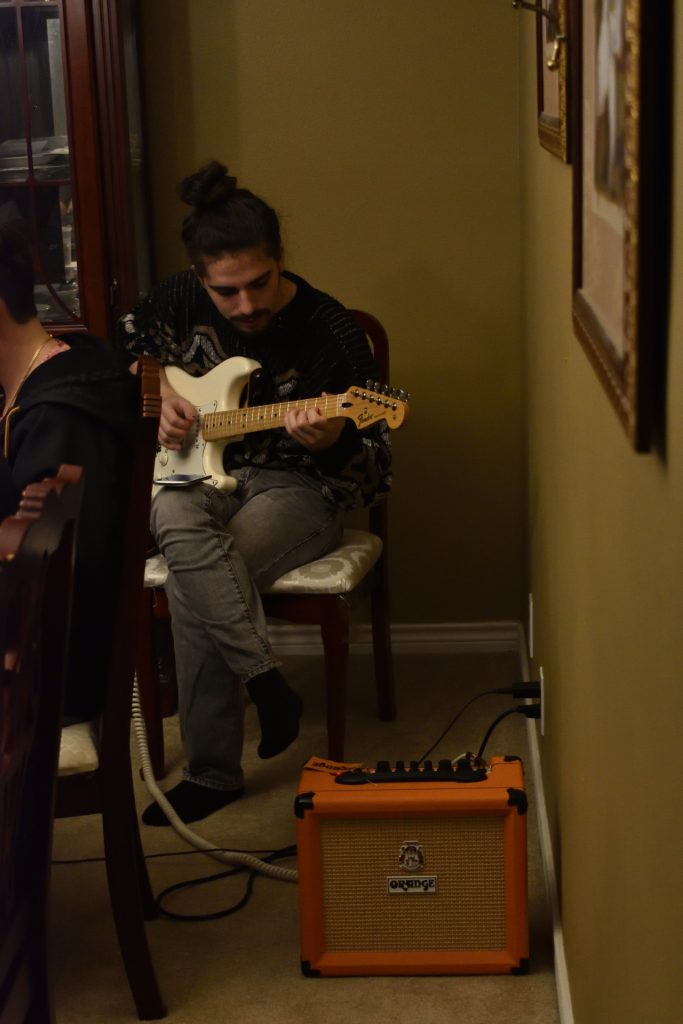 At the end, Paulie led us in a circle prayer, giving gratitude for the family who could make it, prayers for those who could not, and remembrances for those in our past. Big shout out to Paulie for keeping the tradition alive!