A few weekends ago, I visited my friends, Patty, Dave and their kids, in Washington, DC. I hadn’t planned on seeing the famous cherry blossoms because they normally bloom later in the spring, but the unseasonably warm winter/early spring brought them out for my trip.

The last time I was in DC at the same time the Cherry trees were blossoming was in 1987, when I visited Pam Troxler and Merrie Neurock during Easter of my freshman year at MIT. Pam was attending Georgetown University, and Merrie was still in high school, having moved from Texas to the DC area. I recall thinking they were very pretty back then, but now that I am older I think I appreciate them more(the misplaced modifier is totally intentional; it works both ways).

I took all these pictures on the last day of my visit. Patty dropped me off at The Washington Monument on her way to work that morning.

I walked from there to the Jefferson Memorial, which includes The Tidal Pool, where the majority of the Cherry trees are planted.

They were a gift from the Japanese government shortly after the turn of the century. I found out the first shipment had to be destroyed because of infestation and disease problems, but a delicate diplomatic crisis was averted with a second shipment, and these are the trees that stand today.

As you can see, the weather was absolutely gorgeous. The day before, Sunday, this place was far too crowded, but this morning, it was perfect.

There was a cute little girl having her picture taken by her mom, so I borrowed the subject, placing the Jefferson Memorial in the background.

There were people in paddle boats, like this one:

The dome of the Jefferson Memorial reminds me of the Great Dome at MIT.

The memorial itself is solemn and impressive. Hope you enjoyed the trip with me!

Arianna got an early start on our garden this year. She used an egg carton to start some beans, and I think within a week, not only did they sprout, but they tried to escape. So she transferred the most troublesome ones to a higher security facility. With a fence. And then she posted a guard. Their former cell mates have also attempted escape from the egg carton(18 in all) and are all now in isolation on the window sill.

I pointed out to Arianna that the plants lean towards the light, “See how they’re trying to sort of reach the window?” To which she responded by turning them around 180 degrees. Later that day, they had already turned back to the window, which was faster than even I expected. One of us thought about making a movie, so she set up her camera to record the next flip. You know what? They turn around in about an hour!

I’d like to post the video, sped up somehow. But for now, here’s the pictures of the bean stalks, with the guard so you get a sense of scale. 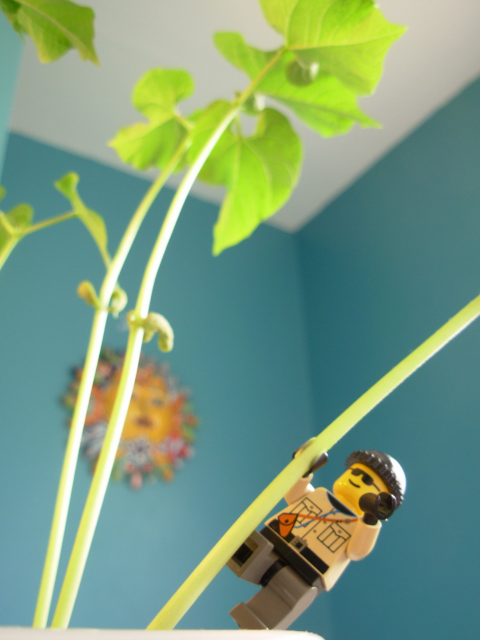 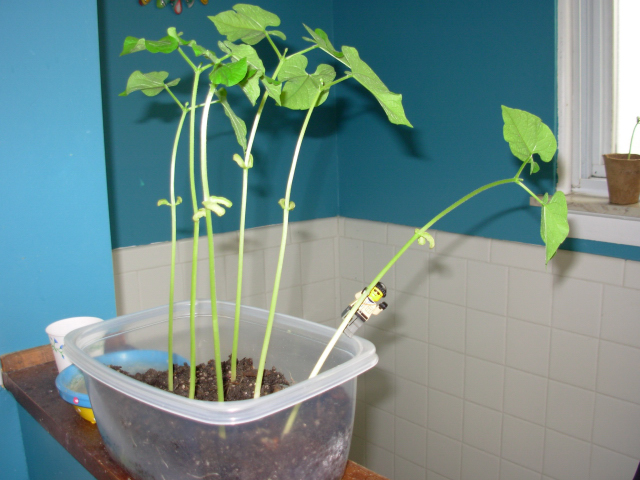